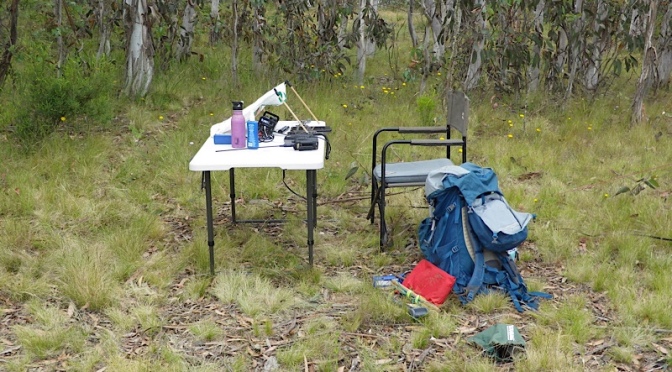 UTC 0000 is equivalent to 11AM in south-eastern Australia so it is relatively easy to make those contacts, by arriving early enough to set up and get on the air.

Mt Foxlow is enclosed by Yununbeyan National Park, VKFF-0555, which has few access routes that are not on private land. As in the past I contacted the owner of one access property which has a normally locked gate allowing us to reach the national park. He was willing to unlock the gate for us and would lock it again at the end of the day after we return.

Normally we try to get as many stations on air as possible on NYD because of the additional S2S points that the activators can earn. So Andrew M (VK1AD) planned to activate Mt Cowangerong not far from Mt Foxlow. However the state National Parks and Wildlife Service notified several weeks earlier that the access road to that summit was to be closed for roadworks (it needed it!). Andrew’s next choice was Webb’s Ridge but that was also going to have difficult access. So I invited him to come with me to Mt Foxlow, he would mainly use VHF and UHF, I would mainly use HF. We try to share the S2S opportunities by calling the other one over to our rig when a new S2S opportunity presents.

Arriving around 9:45am we had 15 minutes to make our advertised operational time of 10am = 2300 UTC on 31/12. I got my zs6bkw doublet up in the air fairly quickly and set up the radio and logging tablet. I made a few mistakes with the logging setup which I had to correct later, but no major issues occurred.

Once on the air…

Before 0000 UTC I made about 16 contacts which I noticed later incremented my SOTA activation contact tally to 10,001. A nice milestone to reach in the 10th year of SOTA for VK1 and VK2. (VK1 anniversary is 1st Feb, VK2 and VK4 on 1st September).

Conditions were not brilliant in terms of dx, I made a few contacts with ZL activators on 15m, a scratchy contact with a JA too. Apart from that in the first hour I was mainly operating on 40m ssb. There were lots of activators out. I had expected to make contacts on 10m as well as the usual 20 and 17 m. But few signals were heard above the noise level, very disappointing.

After the 0000 UTC milestone had been reached and we were firmly in 2023, we could relax a bit and just enjoy working as many as possible. There was increasing thunderstorm activity approaching and the bands were getting quite noisy.

My final contact tally was 45 out of which 40 were s2s contacts. Also about half were with activators in parks for the WWFF awards scheme. They will become park to park contacts in the WWFF log provided other activators also submit their logs.