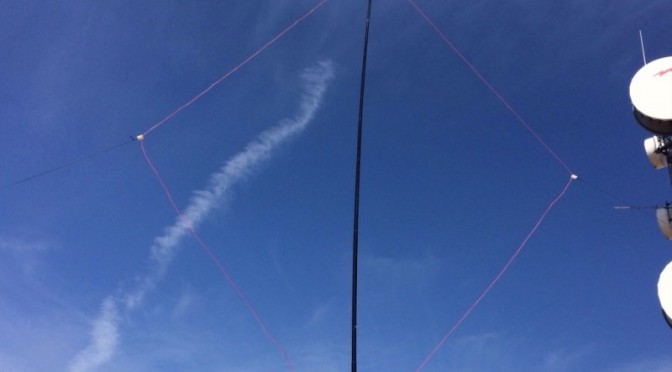 How would you find a new source of unique callsigns for your 10m log?  Operate in a dx contest.

I arranged to operate from Spring Hill, using the IC703 at 10 watts.  I had a 10m dipole and a quarter wave vertical that could be used for this event.  To give me another antenna option I decided to cut and tune a diamond quad for 10m.

The quad is a full wave loop, closed at the end opposite the feedpoint.  The conventional square quad is fed in the centre of one of the horizontal legs, usually the lower end.  By rotating it 45 degrees you have a diamond quad, a square with one apex closest to the ground.  This format has a great advantage for a backpack station, as it can be made using wire, with the outer corners held in place with guys.  The wire antenna is simply attached to a stock standard squid pole (aka telescopic fibreglass fishing pole).  I used a 7m pole and located the feedpoint about 1.8m above ground.

I used insulators made from chopping board plastic.  One was required for each corner of the loop, the top and bottom being used to attach the loop to the pole and the two lateral corners being points where the guys were attached.  I was unsure whether guying those points would maintain the loop in the right shape but it did seem to be ok.  If the insulators slipped along the wire, the guy would have to be attached to the pole at the top of the loop.

The feed impedance of a loop is in the region of 100-120 ohms depending in the height above ground.  To feed this antenna with a 50 ohm line a transformer is required.  I decided to use a quarter wave of 75 ohm feedline, using the impedance transforming behaviour of quarter wave feedlines.

After testing and adjusting the antenna at home, I rolled up the wire and its guy ropes, ready for deployment on the hill.

How did it work?

Quite well.  There was a very strong sporadic E propagation in the first few hours of operation from the hill, giving excellent reports from VK5 and VK4.  This was very encouraging and I made steady progress in my log, handing out contest numbers to those who wanted them and giving others the SOTA summit code.

I later set up my standard linked dipole and was able to compare the quad loop with the dipole.  In some directions the dipole received and transmitted stronger signals than the quad, consistent with the orientation of both antennas.

I did find that during the afternoon, signals from Japan were more consistent on the quad than on the dipole.

As for my unique callsigns score, I did make enough contacts to add 28 new uniques.  I had hoped for more, but conditions were just not good enough for contacts into the USA and that was a factor.  Still, the antenna experiment was fun and worth doing.