The centenary of the ill fated landing at Gallipoli in 1915 was a well publicised event in Australia, with many special events occurring both in Australia and in Turkey.  ANZAC day commemorates a military disaster in 1915 in which thousands of Australian and New Zealand soldiers died attempting to invade Turkey but were repelled by the Turks at a great cost to both sides. Oddly enough the nature of the conflict has seemed to generate long lasting mutual respect on both sides.

The amateur radio community participated in the event by running various special event operations. In Canberra it took the form of a broadcast at dawn featuring various dignitaries from the military and the Wireless Institute of Australia.

A corresponding special event station was set up by the Turkish amateur radio association near Gallipoli.

The Canberra Region Amateur Radio club  supported the WIA event by setting up a field station on Mt Ainslie directly above the Australian War Memorial.  After the broadcasts were completed the station went into general contact mode and was kept on the air until about 3pm when the antennas and equipment were packed away. A lot of interest was shown by the regulars on 40m and some who are not heard often.

My interest in this event, apart from contributing to the clubs operation, was to provide SOTA operators with a contact with the special call sign from the SOTA summit. To be compliant with the SOTA rules I used my normal SOTA equipment powered by a LiFePO  battery. The 40m antenna was a wire dipole supported by a mast and a tree.

After the main station was packed away in the afternoon I set up my usual SOTA station to continue making contacts as vk100anzac on 20m.

Some photos here show my setup in the club tent on 40m in the morning.    The IC703 is using the 4200 maH battery on the nearest edge of the table.  The key being used in this pic is a Brown Bros BTL, 1965 vintage.  Photos by Min Sun, used with permission. 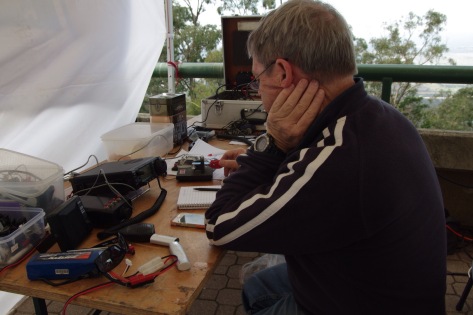 VK1DA sends some code while Fred VK3DAC observes and listens to the message sent. 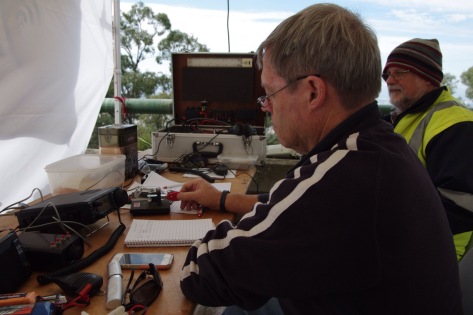 The other HF operating positions are on the right.  Dale VK1DSH is seated at the right hand end of the table, Raoul VK1FIVE is standing on the far left.  Roger VK2ZRH is on the far right explaining an aspect of his 10 GHZ station which he used earlier in the day to make a contact with Dale VK1DSH.  I don’t have the name of the person standing next to Roger, I will add his name when I know it. 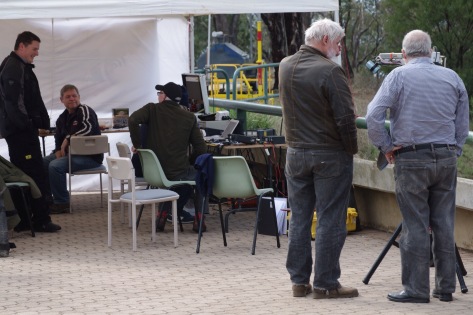 The 20m operation was housed in a small dome tent and there wasn’t much light to take photos as it was almost dark when I set that up.  I took some photos by torch light and the camera was the iphone 5.  This was later in the operation when I was trying the 706 to see if the higher power made much difference. 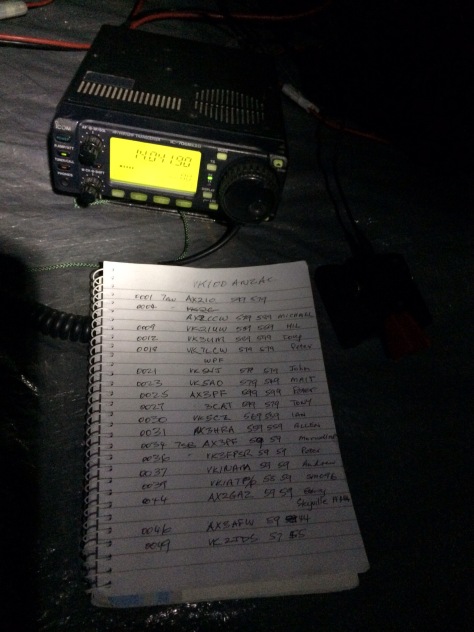 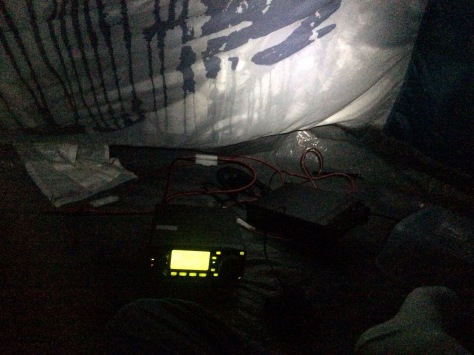 On 20m I made 43 contacts using the IC703.  I did have the IC706 available but I wasn’t sure the battery would last the distance if I used the higher current required by that radio.  I did call Mike 2E0YYY in the UK  using the IC706  on 50 and 100 watts just to see how well he heard its signal, well after the propagation faded somewhat.  He gave me a signal report about the same as how I was receiving him.

Overall I thought national and international interest in the special event station was pretty good.  Thanks to all those who patiently waited for the traffic to clear and make their calls.