I have had problems with my Icom HM103 mike leads, caused by breaking the locking tab off the RJ45 plug.  This happens usually because the mike and lead are slightly tangled with other gear in my SOTA backpack, even though I use a plastic box to carry the small pieces like headphones, morse paddle, microphone and adaptors.

It also happened once before when I had the microphone of the IC706 stored in the central console of the car.  Pulling it out of where it was carried without due care for the plug  eventually damages it.

And without that little bit of plastic, the mike does not stay in the plug for very long.

Having broken the plugs on my IC703 mike and on the IC706 mike recently I decided to replace the plugs but add the shrouds or covers that protect the crucial locking tab. 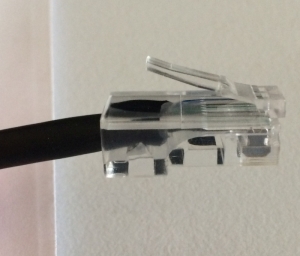 The plug with the protective shroud looks like this: 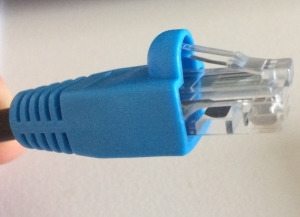 I looked for heatshrink tubing that could be used for this purpose, but the smallest I had was labelled 1.5/0.8mm.  A shopping trip to my local computer/electronics parts agent in Yass produced no thinner option.  When compared with the existing wire, the diameter when shrunk was too large to fit into the slot of the connector.  So another method had to be found.

For the first mike I had cut the lead right at the point where the wire enters the plug body.  This created a problem with the shield connection and I had to try to form the shield into a narrow form so that it could slide into the appropriate slot.  After twisting it to create a spiral of multiple strands, it worked but I wished I had found a way to preserve the original insulation.   So when installing the second plug I didn’t cut the wire at the back of the connector, instead I cut the entire connector just behind the crimp point for the conductors.  That way I preserved as much as possible of the original shield wire assembly inside its insulation.

Cutting through the plastic plug body was simple enough but I did that in about 6 sections, ensuring that the wires were not damaged.

Result: a robust plug assembly on both my Icom microphone cables.

I am hoping this surgery will provide longer life for the plugs.

Footnote: I know blue shrouds don’t look right on these black cables and black radios.  But that does not worry me one bit.  And the mike is safe for children.