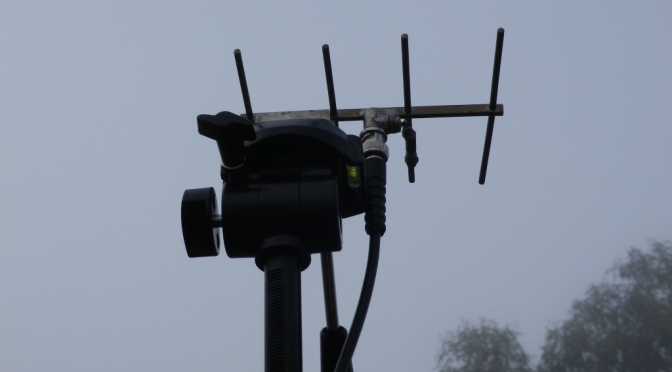 In keeping with the trend for activity days that match the band with the day of the month, a 23 cm activity day in and near vk1 on the 23rd of March was organised for SOTA operators by Andrew VK1AD.

I operated from Mt Mundoonen, which is near Yass.

The antenna for 23cm was a 4 element yagi mounted on a camera tripod as seen in the featured photo above.

The weather conditions were misty at 8am, but it cleared up later.

The operating position for this activation was from inside a sun shelter, a small 3 sided tent structure that I find helps a lot to reduce sun and wind exposure and is also useful in rain.

I was impressed by the signals received on the 2m dipole. The beacon from Sydney VK2RSY was good copy and I heard the VK3RGL beacon from near Geelong at a low level. Surprising to hear it on such a low gain antenna. Zero db above a dipole…

[edited following comment about reception on the 2m dipole] A note on the dipole: Testing the 2m dipole antenna for SWR while mounted at about 4m elevation, offset about 2m from my metal clad shed at home, I noted a significant change in impedance depending on whether the dipole was end on to the shed, or aligned broadside to the shed. Clearly a 2m offset from the shed is insufficient for there to be no interaction, so you wonder what is the effect on each antenna when you see antennas mounted on cars, with spacing of several inches only between antennas for various bands.